Sourced from the Lobster Council of Canada…

With hundreds of premium processed products and live lobster available to the trade and consumers worldwide it is impossible to provide preparation advice for all product types and tastes. However, the following will help you with cooking live lobster and enjoying lobster meat and raw tails. For other products and value added items please refer to instructions from the producer, your retailer or supplier. 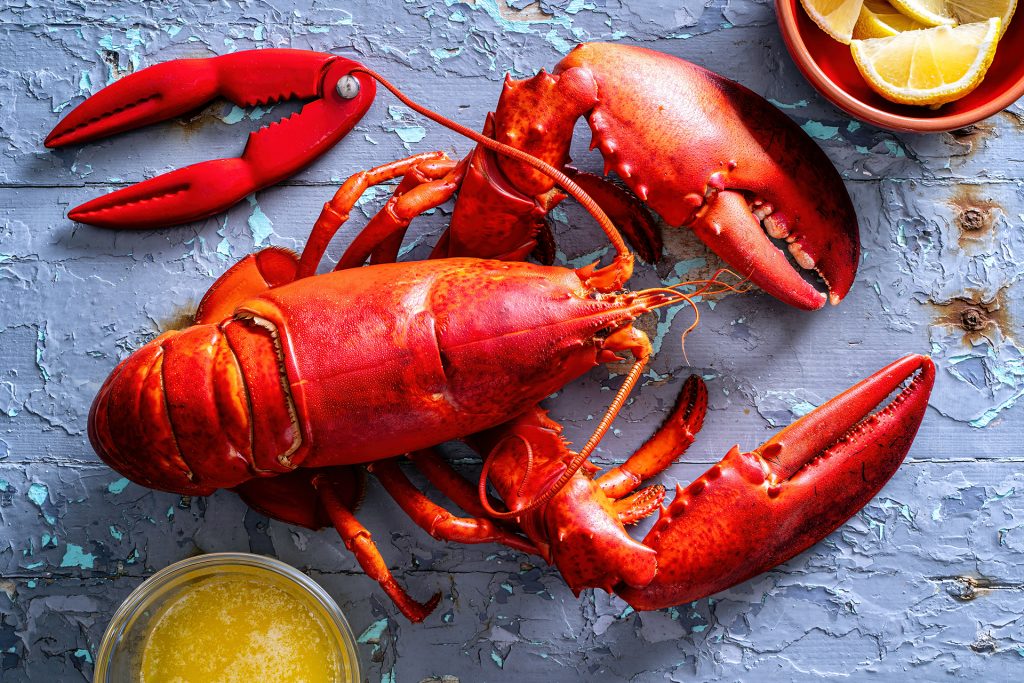 For frozen products, defrost according to the instructions in Handling Lobster.

Allow 1 to 1 1/2 pounds of lobster per person, and add a few more in for hungry enthusiasts or good measure—remembering that lobster meat freezes beautifully for next-day chowder! 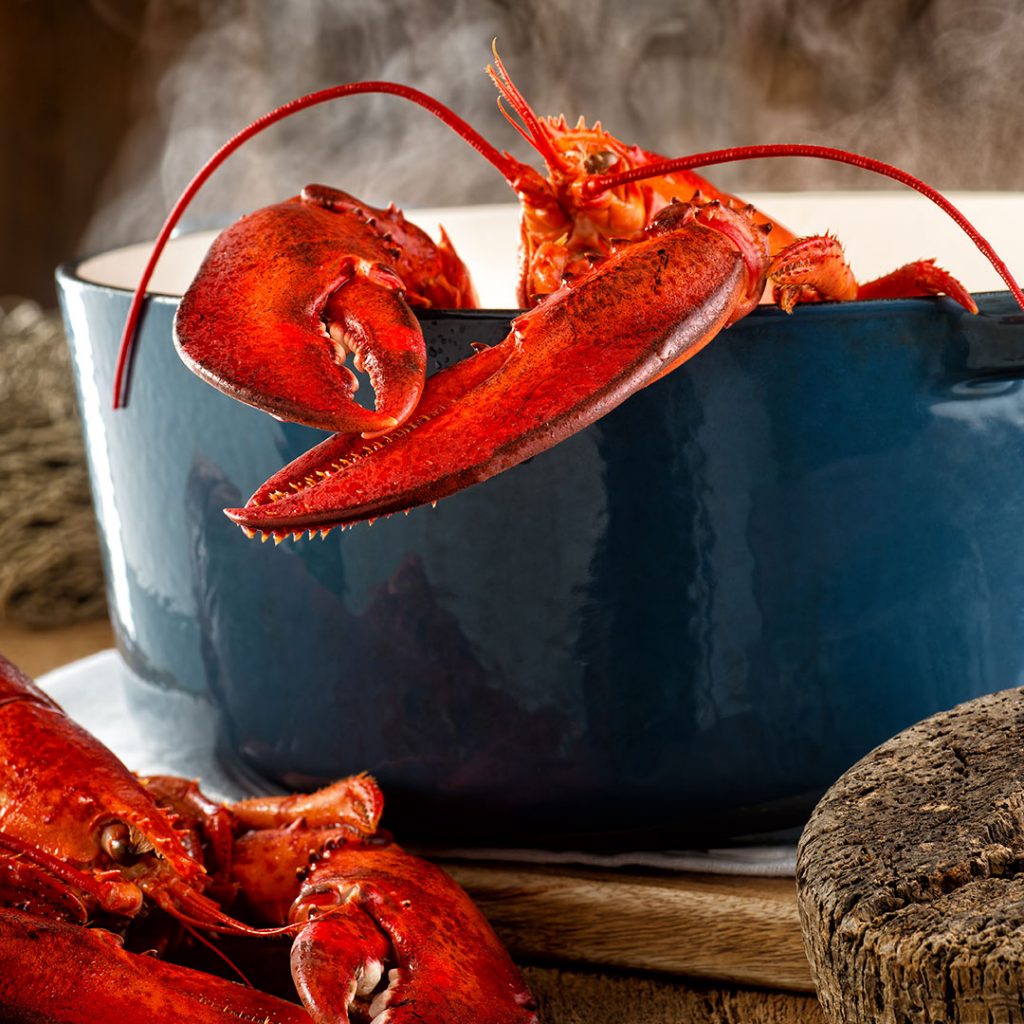 Bring salted water (or seawater!) to a full rolling boil — enough to fully cover the lobsters. When the pot is ready, grasp the lobster by the back and plunge it headfirst into the boiling water. Cover and simmer 7-10 minutes for the first pound, and 2-3 minutes for each additional pound.

You’ll know your lobster is cooked when you tug on an antenna or small leg and it pulls away easily.

If there’s more than one lobster in the pot (and there always is!), increase the cooking time a little. Once the lobster is cooked, remove it from the water. The lobster will continue to cook in its shell after it’s retrieved from the pot. If you’re going to let them rest hot on the platter, take them out just before they’re done — and if you’re placing them into an iced water bath to stop them from cooking any further, leave them in the pot for the full cooking time. If you plan to serve the lobster cold, refrigerate it until needed.

If you like, be creative with your cooking liquid! Try adding carrots, onion, white wine and a bouquet of herbs to the salt water. If you eliminate salt, you can reserve the cooking water for soups or sauces. 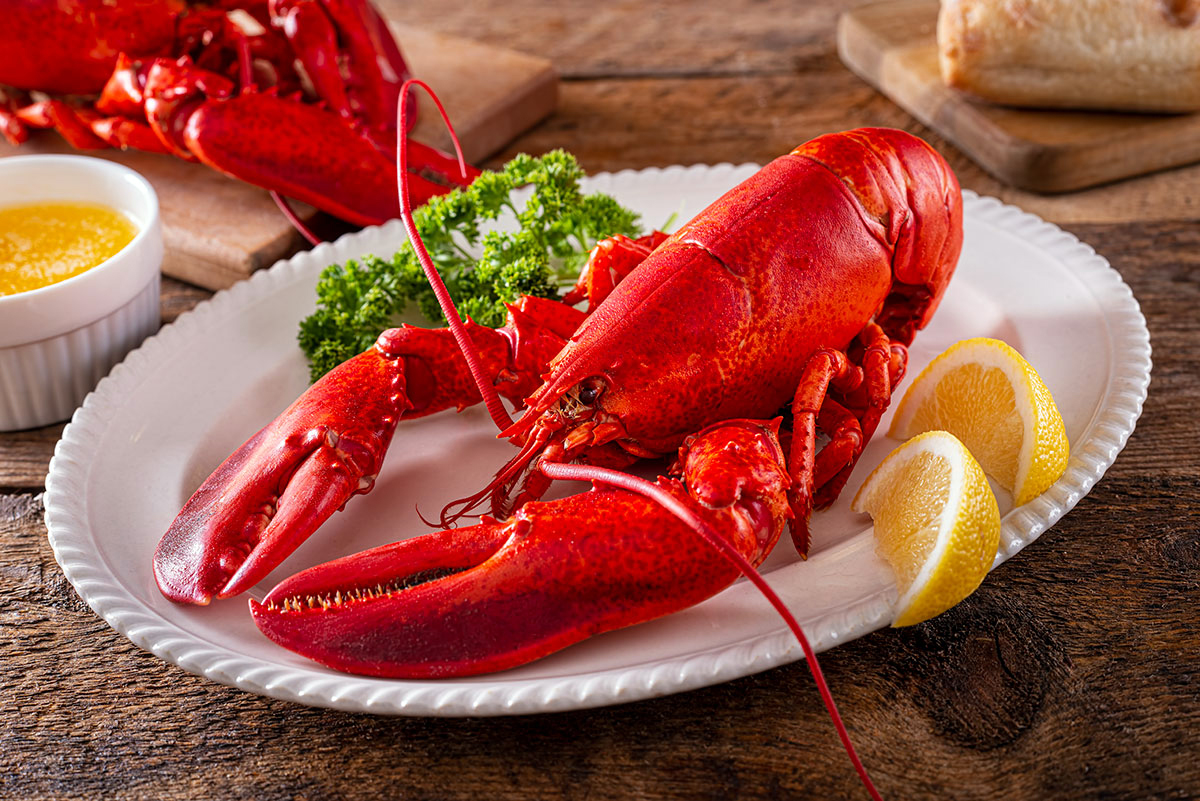 It’s a two-step process: while your poaching liquid is simmering, bring a second pan of water to a full rolling boil. Place the lobster headfirst into the boiling water for 1-2 minutes, then remove and transfer the lobster to the poaching liquid. Cover tightly and simmer (without boiling) until done. Test by tugging on an antenna or small leg, which will pull easily away when fully cooked. 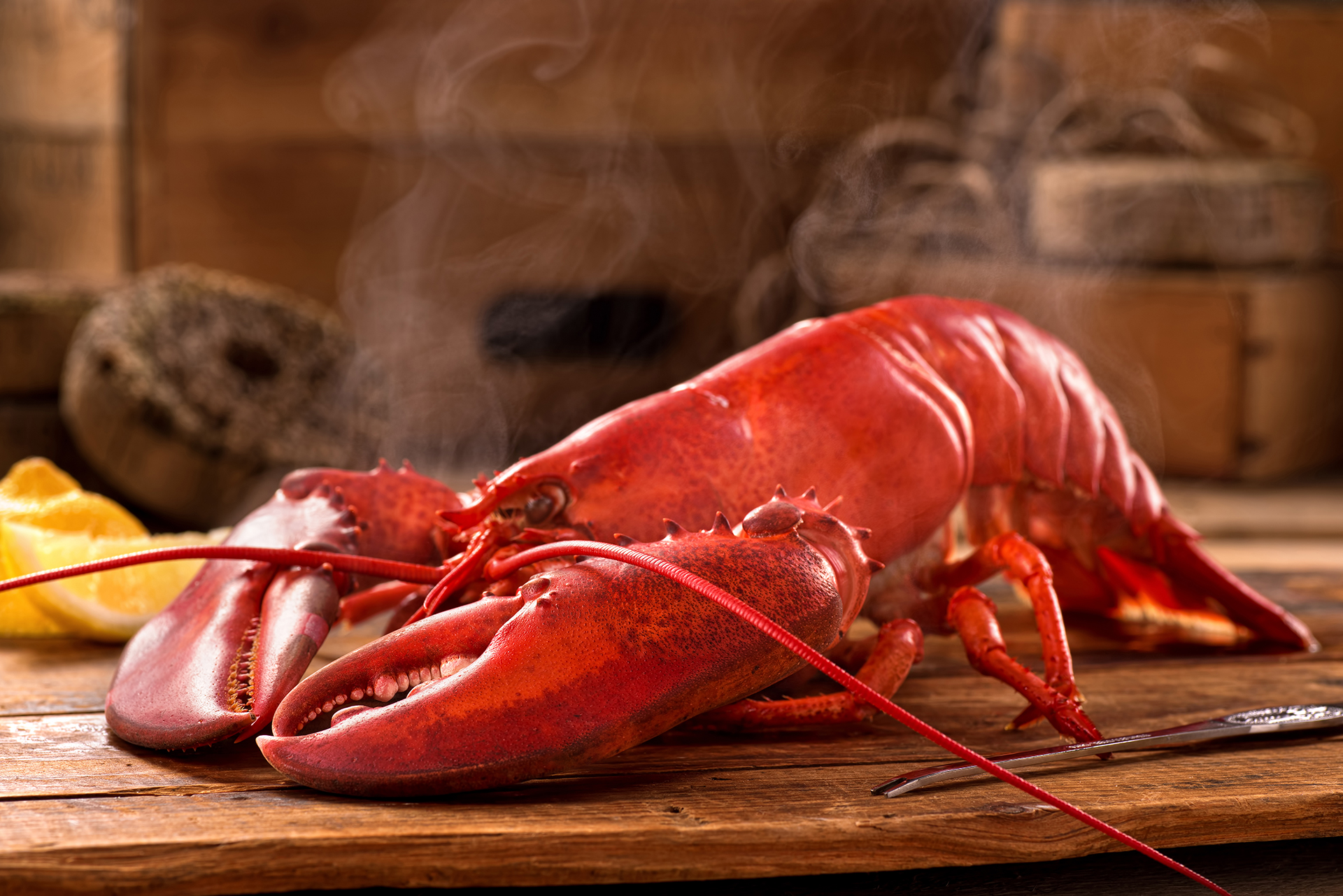 To broil or grill, we need to open up that shell so the meat can get straight onto the heat. With a sharp butcher knife, pierce the well-defined cross on the back of the head first, facing towards the tail. The lobster will die instantly—any movement is residual nerve twitching. Continue to cut down the back, splitting the lobster lengthwise.

Alternatively, if you’re squeamish to cut the lobster live, blanch in boiling water for 2-3 minutes prior to splitting, leaving the remainder of the cooking for the broiler or grill.

After splitting, extract the cartilaginous stomach sac from near the head along with the gills and discard. Check for any pieces of broken shell and remove.

Remove and discard the string-like intestine that runs from head to tail. It may have been cut, so check both sides of the shell. If you plan to use the tomalley or liver in a sauce, remove the soft green-gray, or creamy organ. It can be left in place for broiling and should not be thrown away, as it is delicious. Roe, also delicious, can be removed for a sauce or left in place. It appears as a shining green-black substance when raw, and turns brilliant red when cooked.

As always, lobster is delicious done simply. To cook under the broiler, lay the lobster split side up on a pan and brush lightly with butter; place in the broiler about 4 inches below the flame/element. A 1 1/2 pound lobster takes approximately 15 minutes to cook. Serve with melted butter and lemon wedges, use your own marinade or basting sauce, or remove the meat and combine with a stuffing… the possibilities are endless.

To cook on the barbecue, pre-heat to medium-high. Brush the shells with olive oil and place halves, meat side up, on the barbecue. Brush the meat side with oil and sprinkle with salt and pepper. Cover the barbecue and grill until meat is just opaque in the thickest portion of the tail, 7 to 9 minutes. Enjoy!